***READ HERE FIRST***
Before you read this, I need to put a trigger warning as the content in this post involves self-harm. I will put a warning label before the paragraph. This was a very difficult post to write since it is about my first dog, Sweety who passed away 9 years ago on this day. If you feel triggered at any time by reading this post, please stop reading immediately and look after yourself. Get help if you need extra support because there is help out there.

Thank you for reading this.

Today is a significant day for me and it’s the anniversary of my first dog’s death. Her name was Sweety and she was a Maltese. I can’t believe it’s been nine years that she’s been gone. It doesn’t even feel like that long. It just feels like as if it was yesterday that she passed away.

If you knew Sweety, she was loved by all. Sometimes she can be smart but sometimes she can be dumb but in a cute way. My family got her as a present when I was five. I don’t remember exactly how we got her but I think my dad surprised me and my two sisters with Sweety. Sweety always loved to eat and sleep. That was her life. Of course, my family and I would take out her for walks but she still prefers to eat and sleep and be lazy. We didn’t mind that. She’s such a cutie pie and a funny dog.

Sweety in the backyard

In her last few years when she was alive, Sweety became blind. We started to notice this when she kept walking into things like the wall or the door which was unusual for. So we took her to the vet and the vet said because she was getting old that was the reason she was blind. It was a total shock when the he said that. I had no idea that some dogs can become blind due to old age. We felt really bad for Sweety because she couldn’t see a thing. There was one time where we left the door open and Sweety fell down the stairs because she didn’t know where she was going. Thankfully, it wasn’t serious and we had to be extra careful with her.

30th March 2006 was the day I found out Sweety died and that day that changed my life forever. I remember exactly everything what happened on that day. Sweety died in her sleep from old age so she passed away peacefully but it felt like my heart shattered into a million pieces. I wasn’t expecting to lose her so suddenly and It was my first real loss to death. It was something I never experienced before which made it more difficult to cope with. Not only I was struggling with Sweety’s death but I was also struggling with my depression which was very bad at that time and I was failing school in Year 11.

One of the first few people I told about Sweety’s death was one of my ex-significant other. When I told her that Sweety died, do you know what she said? She said that I can have one of her dogs. That made me even feel more worse. I know she was trying to be supportive but that was a very insensitive thing to say. I didn’t want one of her dogs. I wanted my Sweety back. Also, guys, do not say that to someone if someone has lost a pet. No pet can be replaceable.

I wasn’t coping well at all like I wouldn’t leave my room for an entire week. I was isolating from friends and even family, I stopped eating and didn’t even sleep. I also kept skipping school because I didn’t want to be at school. There was also one time when I was doing my exams, I broke down in tears. It was quite embarrassing because there were other students who were doing their exams as well. One of the teachers had to escort me outside because I was such a mess. I also had to go to see the school counsellor and told her what was going on. I guess it did feel a bit better to talk about Sweety’s death.

The only thing that did help me to cope was by hurting myself. After I found out Sweety died, I ran into my room and cut myself pretty bad. It wasn’t serious enough to get medical attention but it did leave a really bad scarring which I still have now. I know there was other ways to cope besides hurting yourself but at that time, it was the only thing I knew how to cope.

Now that time has slowly passed, I’m finally learned how to cope with life without Sweety through therapy and also supportfrom my doctors but there are some days that are harder. Around this time every year, this is when my mood seems to drop. When certain things remind me of Sweety like when someone talks about their pet or whenever I see another dog, sometimes I break down. It’s the same with my other dog, Charlotte who we had to put down more than 2 years ago.

Before this anniversary today, I’ve been having dreams about Sweety leading up to today. It felt like in my dreams, she was real. I know I’m never gonna get over Sweety’s death but I know that she had a great life. I have to tell you the truth, I’m struggling to write at the moment because I’m in tears (which I’m not ashamed to say that) but I feel like I need to. I want this post to be dedicated to her and also in memory of her.

Oh Sweety pie, it’s been nine long years since you passed away and exactly a year from now, it will be a decade. You were one of the few things that made me happy even when I had a difficult childhood. You made me happy and always made me smile. I wish I was able to spend more time with you but I know you had a great life. You made an impact on our lives forever and we thank you for all the memories you had given us. Please look after Charlotte for us and we know both of you will be looking down from above.

We will never forget you both and forever in our hearts. 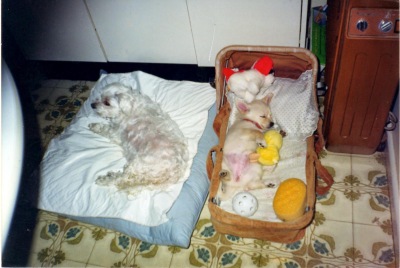 Sweety & I during Christmas

Be random but stay safe!